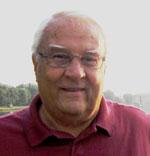 John Stout holds the titles of Dean Emeritus and Professor Emeritus of Public Administration at Roger Williams University where he has held four deanships and served as chairman of two academic divisions, head of the Faculty Senate, and Assistant to the President for two presidents.  He has taught courses in political science and related subjects for fifty years. At various times in his career, Dean Stout has worked as a consultant to colleges and universities and to government programs in urban affairs and public management.  Prior to his retirement from RWU, he served as the Director of the Institute for Public Policy. He is currently serving as an adjunct faculty member at several institutions.  He holds graduate degrees in public administration from Nova Southeastern University and political science from Northeastern University.  He earned his BA in political science from Dickinson College.

Stout served as both the Director of the former RWU Institute for Public Policy as well as its co-chair. Among the Institute’s projects were a training program for state and municipal employees; a project of organizational change for the Providence Fire Department designed to serve as a model for similar municipal departments nationally; various programs involving emergency preparedness and water management; a Public Administration Academy in a Rhode Island high school for students interested in public service careers; projects related to affordable housing and community development within the state and region; and management improvement programs for selected Rhode Island municipalities.

As the coordinator of the Open Division (and later as Dean of the Open College), he was engaged in the development of a multi-disciplinary program of military education. For over 25 years, he was the coordinator for military programs and initiated institutional affiliations with a variety of military organizations and educational programs. He was recognized with his receipt of the Commander’s Award for Public Service by the Adjutant General of the RI National Guard, and with two "Certificates of Appreciation" from the New Jersey Military Academy and New Jersey Army National Guard.

Most recently, Professor Stout served as an advisor and consultant for the College Unbound program, an experimental college program extension of the Met Schools and Big Picture secondary schools.